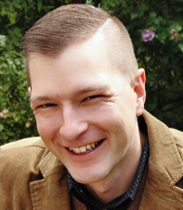 Jonathan Glenn Reinhardt is a PhD candidate in English at Cornell University. He specializes in Early Modern British literature and culture. His research focuses on the relationship between literature, philosophy of information, and networks of knowledge formation, patronage, and intercultural exchange, as exemplified in intelligence networks. Jonathan's dissertation is titled “Political Secrecy and Theatricality in Marlowe and Shakespeare” and argues that in the late Tudor and early Stuart periods, theatricality produces a public spectacle of “plausible alternatives” that expresses the hidden structures of political secrecy. Jonathan has taught courses on Shakespeare and philosophy; utopias; the sacred texts of Judaism, Christianity, and Islam as literature; mystery fiction; and a special topics course on espionage, literature, and cinema. He has published on the concept of bardic voice, and has several articles forthcoming on Early Modern British literature and the history of science and information.

Jonathan has been a Graduate Resident Fellow at Alice H. Cook House, Cornell University, since 2015 and is the Huntington Fellow at Lincoln College, University of Oxford, in 2018.