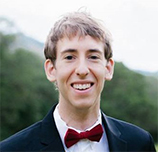 Born in Ypsilanti, Michigan, Michael is the eldest of three brothers and grew up in Orlando, FL. He returned to the Midwest as an undergraduate, attending the University of Oklahoma where he majored in physics and also studied mathematics, Latin, and history of science. Michael began a Ph.D in physics at Cornell in Fall 2014. He is a member of Professor Paul McEuen’s group, researching novel biological applications of single-atom thick materials. In May of 2015, he married his wife, Taylor, who is a J.D. candidate at the Cornell Law School.

When not in the lab, Michael loves playing basketball, reading novels, eating good food, and spending time with family and friends. He is excited about his first year as part of the Alice Cook House community.