Each House in the West Campus House System has its own Dining Room led by the House Chef and Cornell Dining staff.  A more intimate space to share meals with friends, colleagues, faculty, and staff - or to grab a quick bite to eat on your own before heading up the slope to class or a group meeting - the Dining Room is a place where the Alice Cook House community can gather together and enjoy home cooked food.  Please notify Chef BJ Wojtowicz or any of the Dining staff if you have dietary restrictions as they are able to accommodate all dietary needs. 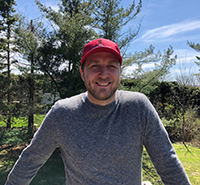 My passion for cooking started at an early age in a small town called Larksville, PA. My passion for food was heavily influenced by my grandmothers. I shared a double block with my grandmother and I can still smell the aromas and distinct tastes of her cooking. The ingredients that went into her recipes came straight from her husband’s farm. This is where I really started to appreciate food and respect the earth from which it grew. I can still taste the fresh kholrabi sliced from my grandfather’s knife that came straight out of the garden. The tears that followed by grating the vegetable into a delish horseradish was worth every stroke. These values influenced the way I cooked my entire life and remains the reason why I am so passionate about every dish I create.

These early experiences with food led me to my first job as a dishwasher and my first experience in a professional kitchen. I quickly saw where my future was headed and soon landed my first cooking position at 15 years-old.  My first big opportunity came when I moved to Denver at 23-years-old. I spent six years at Kevin Taylor’s Restaurant where I earned the Mobile 4 Star rating, won several cooking competitions, and taught culinary classes. My next venture was at the French Laundry. This is where I learned technique and discipline. Once again I saw the advantages of sourcing responsibly and knew I was in the right place. After gaining the knowledge and confidence I needed, I knew the next move was New York City. I packed my bags and headed for the east coast without a direct plan. I explored a few different options and ended up finding the right fit, Eleven Madison Park. I started as a line cook and worked my way through the kitchen and within a few months I was promoted to sous chef. I worked all areas of the kitchen such as purchasing director to private events. I also created many dishes that are featured in Eleven Madison’s Park cookbook and was one among the many talented faces at EMP who led the restaurant to being voted #1 in the world in 2017.  I have been living in Ithaca for six months now with my fiancée, two dogs and a cat and I am very excited about joining the team here at Cornell University.