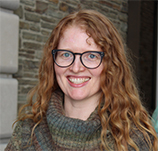 Christy Croxall loves teaching, mentoring, listening to, and supporting undergraduate students as they navigate the complexities of college life. She is thrilled to join West Campus as the Interim Assistant Dean of Alice Cook House. She brings to the House an enthusiasm for connecting students to ideas, experiences, and resources that support their well-being and development.

Christy first came to West Campus with her partner, Jarrett Anthony, who served as Flora Rose House Assistant Dean from 2011–2016.

Christy has taught courses exploring Native American history and the history of racial inequality in St. Louis. In addition to working on a book on the religious history of the Mississippi River Valley, during the Fall 2019 semester she taught U.S. history at Elmira Correctional Facility through the Cornell Prison Education Program. This semester she is returning to Elmira as a volunteer tutor.

Christy grew up in Indiana and has lived in San Francisco, New York, Philadelphia, and St. Louis. Prior to her doctoral degree (History, University of Delaware), she earned an M.Div. degree at Union Theological Seminary in New York City, led religious communities, served as a hospital chaplain, and worked in religiously based non-profit organizations, including the Foundation for Ethics and Meaning and Habitat for Humanity. As an undergraduate at Purdue University, she double-majored in Philosophy and Religious Studies and minored in Music Theory and English.

Christy loves running outdoors. The trail above Six Mile Creek is a favorite path. She has to be cautious about sun exposure, so you may see her in an unusually large hat that makes her look like a beekeeper. She and Jarrett frequently hike the splendid trails around Ithaca. They also enjoy vegetarian and pescatarian cooking and watching movies, with a special fondness for foreign films and film noir.