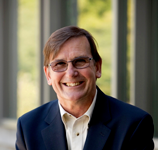 André Dhondt is a native of Belgium where he obtained his Ph.D. in Biology at Ghent State University. He worked for the Food and Agricultural Organization in Madagascar and Western Samoa for three years and later returned to Belgium to join the faculty of Antwerp University. There he developed an active research group in Population and Behavioral Ecology. Dhondt was a visiting professor in Kisangani (Zaire, now Democratic Republic of the Congo), Algiers (Algeria) and Paris (France) and later joined Cornell in 1994. Currently he is the Edwin H. Morgens Professor of Ornithology in the Department of Ecology and Evolutionary Biology and the Director of Bird Population Studies at the Cornell Laboratory of Ornithology. His main research interest is the study of disease in House Finches, funded by substantial grants of the National Science Foundation. In many of his research projects he involves members of the public (“citizen scientists”).