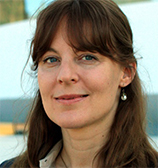 Lisa Kaltenegger is Associate Professor at Cornell University and Director of the Carl Sagan Institute. Her research focuses on rocky planets and super-Earths atmospheres in the habitable zone, as well as the spectral fingerprint of exoplanets that can be detected with the next generation of telescopes. Lisa Kaltenegger was named one of America's Young Innovators 2007 by Smithsonian Magazine, was selected as one of the European Commission's Role Models for Women in Science and Research, and recently received the Heinz Meier Leibnitz Prize for Physics of Germany in 2012, among several other awards.