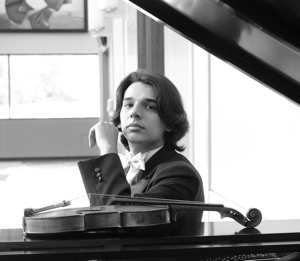 His interdisciplinary research focuses on the intersections between music, literature, and politics to question the transhistorical construction of Brazilian national identity during the military dictatorship (1964-1985) and in contemporary right-wing regimes. In addition to his academic work, Rafael has an active career as a violinist and chamber musician, appearing in concert engagements worldwide.

He is the founder and Artistic Director of the "Encontro Internacional de Cordas," an annual music festival in Brazil providing underprivileged students with the opportunity to study with world-class artists. In recognition of his philanthropic efforts, Rafael received the Fumagalli Trophy, the most prestigious award given by the city of Limeira, his hometown.

Rafael enjoys gaming, hiking, and spending time with friends when he is not playing the violin or reading.